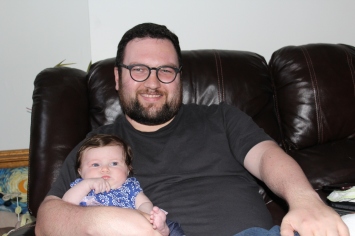 Before Lo was born, I was very wary of telling anyone that Adam had epilepsy. When I did divulge this information, I often received unsolicited advice, worried looks and surprise. Many voiced concerns that Adam caring for her alone would be dangerous. I’d be lying if I didn’t also have my moments of worry or anxiety with Adam caring for our child- just like any first time parent, you are unsure, your hands a little wobbly around this tiny creature, worried you will drop or break or smush them.

Even Adam voiced concerns, right before she was born, that he wasn’t up for the physical and mental challenge of caring for a newborn all day. His sleep schedule would be disrupted, likely to trigger seizures. But I know my husband better than anyone else in the world, and I know his limitations. I can see it in his eyes before he feels it; I can predict what trajectory his seizures will take and I know how to stop them in their tracks before they progress.

When they laid Lo in Adam’s arms that first day in the hospital, I held my breath. I knew that the excitement, insecurity and fear was bubbling right under his skin. I didn’t want him to overthink it. But I looked at them together, as he gazed into her sweet eyes, and his entire body was calm. He was a natural.

As the days progressed, I continued to watch for signs that Adam was becoming overwhelmed- but his body remained steadfast, holding her delicately, changing diapers, swaying her when she fought sleep. He was more in control of his body than I’ve ever seen him- because his mind knew that this was more important than anything he’d ever done before.

Before I went back to work, Adam and I had a serious conversation about his limitations. I know the stress of caring for a newborn five days a week; it’s slightly maddening. We made the decision to put Lo in daycare a few days a week, so that Adam could focus on other home duties, and rest. On his “days off”, he fills her bottles, packs her bag and he walks her to school in the morning and picks her up in the evening. When I return home, they’re playing, laughing and listening to music together.

Adam isn’t perfect with Lo, as many first time fathers aren’t. His array of seizure medication makes it difficult for him to hear behind his mind’s “white noise” sometimes, and process a little slower than others. He often doesn’t see Lo’s cues when she’s hungry or tired, and that leads to some crying fits- but we’re working on it.

Epilepsy will always be a part of our life, but it isn’t his WHOLE life anymore. His good days far outweigh the bad, and he’s found a purpose in his daily routine- to care for and shape this awesome little human.

And while I have always admired Adam for being a strong, amazing man, with scars and stories and heartbreak in his back pocket, I have grown to love him so much more when I see him with our daughter. Epilepsy doesn’t win here, love does.