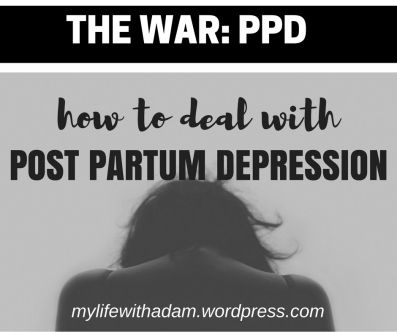 A month ago, I wrote about my battle with post-partum anxiety in The Battle. When I let those words pour out of me and into the public but safe space, I felt freed. For a couple of weeks, I felt I had conquered this anxiety problem and it would merely be remembered as a footnote in my post partum recovery. But I was wrong. Because just a few weeks later, I would hit rock bottom in way that I never knew I could.

This is the first blog post in a 5 part series called, The War. I invite you to read, empathize, understand, and share my story with others: new moms, especially. I am not ashamed of what you are about to read, but the stigma of post partum depression is very real and polarizing. Start the discussion with others. Join it if someone shares theirs with you. You are not alone.

Lo was an easy sleeper: she started sleeping through the night at 3 weeks old, and it scared me so much that I called the pediatrician and said, “There’s something wrong with my baby, she slept all night!” The doctor chuckled and told me to enjoy it: it would be short lived. Well, she was partly right- we enjoyed peaceful sleeping up until week 13, when she started waking every half hour to nurse, or just to be held. Sleep deprivation slowly crept into my body and brain, into my relationship with others, with her.

Working full time and being a mom wore on me, but I suffered silently as it eroded my attitude and mood. I was breastfeeding and pumping four times a day at work. I was exhausted, irritable with people, very blue. I’d rush home to see Lo at the end of the day, just feeling so tired but excited to cuddle and kiss her. She was my only bright spot on those days.

But I dreaded the night. I started becoming more anxious in the evenings, chewing my fingernails, even pulling out my hair, anxious ticks that I couldn’t control or stop. I went in to see my doctor who had been managing my care. She told me that she’d done all she could do and she was concerned that this was deeper than just a surface mood disorder. She hesitated to say Post Partum Depression, but we both knew it had gravitated there.

I took mental health days from work to try to get out of the funk. I took the baby to daycare and came home to sleep- I didn’t want to get out of bed. I When I returned, I felt like a zombie and I couldn’t concentrate on my work. My boss called- and the truth came rushing out of me. I told her about all of it, how I was doing fine, until now. But at that point, I was just sad and anxious- I still had a grip- at least, that’s what I told myself. It’s just the baby blues! But it had been four months. But I was crying in my car on my lunch break. My grip was slipping.

I stopped pumping, I rarely ate. I was spiraling fast. I made all of the calls I could- to post partum specialists and counselors and clinics and psychiatrists- and if they did take my insurance, they were booking over two months out. I lost it- I was crying constantly. My brain was swarming with so much anxiety, I knew I was reaching my breaking point and I needed help fast- but who could I turn to now? Medical appointments book at a glacial pace- and even though it was early November, I took the first appointment- December 12- in between sobs as I learned on the steering wheel of my car.

When your mind is under so much stress, everything seems to be painful- simple brain functions such as memory are impaired- I couldn’t tell you what I ate yesterday or what I worked on. I couldn’t answer Adam’s simple questions about the dishes or the laundry- I couldn’t function. My boss and I discussed options and she urged me to take some time off of work to get better. It wasn’t like me to feel this way, and she recognized the need for self care at that moment.

It was at this point that I decided I needed to be surrounded by family, but I wasn’t ready to splurge $700 on plane tickets back to Missouri. Then my sister called. “I’ve been through this too, you know. Not nearly as bad as you, but I can relate to what you’re feeling,” she said. “Come home, let us take care of you for a week or so. Then you can get your head on straight and go back refreshed.” Those were the words I needed to hear. No one had offered to take care of ME before! I was always taking care of everyone else!

Somehow, someone pulled enough strings to get me an emergency appointment with a new doctor. I bought two tickets to Kansas City, with a new prescription in hand, and I boarded a plane back home. I had high hopes for rest and relaxation surrounded by family.

6 thoughts on “The War: Breaking Point”